29 January 2021 – The NESA Center held a meeting with representatives from Chatham House and other European think-tanks to discuss the future of US-Iran relations under the Biden Administration. The U.S. perspective was given, followed by a discussion of how Iranian leaders read the political map in Washington. Also among consideration was the role European powers (France, Germany and the United Kingdom) are likely to play to close the broad gap between Washington and Tehran and “revive” the Joint Comprehensive Plan of Action/nuclear deal. 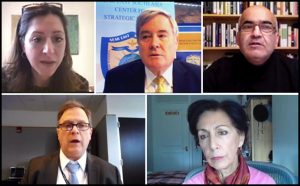